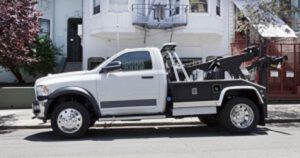 In today’s times, tow trucks are drowned with technology. Automated winches with remotes, compact and bright LED lights, and strong yet economic engines seem to be the “norm”. There is no question that today’s tow trucks are an innovative piece of machinery.  As you can imagine, it wasn’t always like that. There was no hydraulic beds or remote controlled winches when the first tow truck in the USA hit the road.

In 1916, an unfortunate man survived a rollover accident in his Model T Ford in Chattanooga, Tennessee. John Wiley, as he was known, was ok but needed help with his now- wrecked car. Wiley got a hold of his good friend, Ernest Holmes Sr. who owned a repair garage at the time. Holmes had no idea how he was going to help this mangled old Ford but he knew he was going to help. Holmes owned a 1913 Cadillac. A piece of luxury for its time that was quite expensive. He started hacking away at this high end Caddy and implemented what is known as the first tow truck. This primitive approach used a pulley, an iron chain, and various poles to transport wrecked or disabled vehicles to his garage. 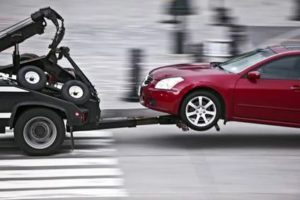 After taking care of  his friend, John Wiley and the  Model T, Holmes was obsessed with making his great idea, even greater. He spent two years of planning with trial and error which landed him onto a solid and concrete idea which he filed his first patent for on January 17, 1918. He had no idea how large his idea would impact the industry of automobiles throughout the country and eventually, the world.

Ernest came up with the “twin-boom” design for wreckers that turned out to be wildly popular in the industry. This popularity formed the “Ernest Holmes Co.” that had the sole purpose of manufacturing and marketing tow trucks in 1919. He pioneered and flourished for years after. Even through the Great Depression, Holmes kept chugging along by supplying thousands of tow trucks to the U.S. military from 1941 to 1945 which was the year of his unfortunate and unexpected death.

Even though the original towing pioneer was gone, the family name lived on. Holmes’ grandson, Jerry Holmes, took over the industry by inventing the first hydraulic setup on a tow truck and history was made again with the birth of Century Wrecker Co; a well-known and still used name in the towing  and recovery business over 45 years after its first use.

In today’s times, the Holmes and Century name still live on. In 1989, Miller Industries purchased the entire company. Miller Industries is now the world’s largest manufacturer of towing and recovery equipment. The parent company may be different but the next time you look at a tow truck, see if it’s a Century brand or even a Holmes. It may very well be part of what America’s first “hooker” started from the ground up with a 1913 Cadillac and some iron chain.